Leak Detector and Water Shut Off Stops With Custom API

Sentinel Hydrosolutions had a web application to act as an interface to their leak detection devices. The application was having issues due to the vendor selecting a third party software vendor that facilitated direct communication with the devices taking a different approach. The new approach meant that the system could no longer directly communicate with the IoT devices. There were also some data collection strategies that were not in sync. Sentinel Hydrosolutions desired historical data for the IoT device users but had no means to host the API or Application.

3. Receive email or optional SMS messages in the event a leak is reported by a device

4. Send commands to a device 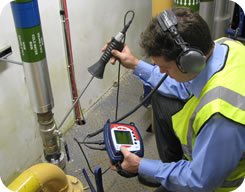 The API receives over 600K uploads a day, the number is expected to increase as more devices come online. The client was behind schedule in release of the web application due to issues with prior vendors.

To implement this, Calance met with Sentinel Hydrosolutions several times on location to understand their vision for the application. Then, the user interface was prototyped early in the design phase for feedback and to drive the visual design. Sentinel's head of engineering made sure that the design of the API matched the present and planned future functionality. The web application was built using Rapid Application Development (RAD); which allowed Sentinel to test working variations of the application over the course of its development. Using this approach, Sentinel was able to use parts of the application and provide feedback that was quickly incorporated into the ongoing development and minimize the chance of failure due to varying visions between development team and client on implementation of specifications.

The web application was written using MVC.Net, AngularJS and Bootstrap and the API as an MVC.Net API Project. For hosting, Calance assisted the client in setting up AWS EC2 instances while maintaining and monitor the systems.

Sentinel was able to get the application to release in very short time reducing the further delay. They currently use the system today and expanding upon it.

This is not the first project that we have picked up after another vendor has ‘dropped the ball’. Integral to Calance’s strength is our ability to analyze a client’s needs both immediate and future. This analysis goes beyond acquiring specs from the client, rather engages the client with discussion on the intended use, rebuttal if a particular intention/desire seem unnecessary or detrimental and building upon ideas that are vague. Calance’s provides all clients with the utmost attention despite differences in size or financial capacity. Calance strives to deliver the best product for a client’s need.

Build Your IT Expertise

Stay informed on all the trends and best practices in the IT industry to protect and grow your business.

How to Implement Public Cloud For Your Disaster Recovery Solution

Many companies have started using public cloud to host non-critical applications and for storage. Some have gone further, moving significant parts...

Today’s technological landscape is one of lightning-fast innovation and constant development. Companies of all sizes and types are pushing to release...

Today, accounting tasks are no longer limited to basic bookkeeping. Instead of handling minutiae like invoicing and payroll, financial departments...